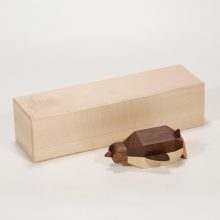 This work was produced by Karakuri Creation Group’s craftsmen, from a selected idea of “12th Karakuri Box Idea Contest”.

When penguins move on the ice, sliding on its stomach is faster than walking.
That behavior is called "toboggan."
The adorable behavior is made into a Karakuri box.
Please slide well.

He can not get the ball!