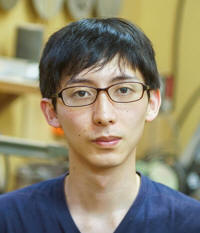 Web shop
This work was produced for an exhibition on the theme of "Ancient Times."
When the theme was decided to be "ancient times," the first thing that came to mind was "koro".
I tried to make its movement into the works.
It's convenient, isn't it, Koro?
I created this work with a sense of gratitude to those who invented it.

"KORO" in Japanese is a cylindrical tool that is laid under a load and used to roll and move when transporting heavy objects.

The other works of Shou Sugimoto