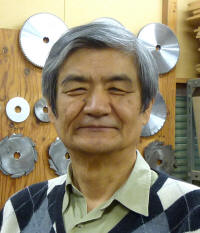 This box was developed for the Christmas present for Karakuri Members 2014.
The "Parcel Cube" series were made around 1990. The appearance of this "New Parcel Cube" is slightly different.. As a result, I became selective in the choice of material used and themaking of the mechanisms. The mechanism is not so complicated but new.

The other works of Akio Kamei