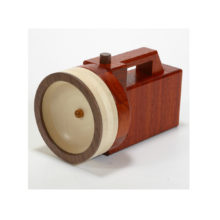 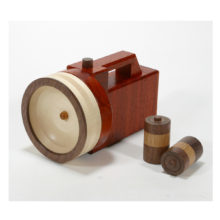 It became a work like “karakuri” most. You will be able to enjoy the “Karakuri” itself. “Though I changed the batteries, a flashlight is notturned on.” Don’t you have such an experience? The experience of such all ofyou was expressed in this work. The batteries set inside, and the button to turn on the flashlight are alsoused by the device. The “quality of flashlight” is a shining work.
This work was produced by Karakuri Creation Group’s craftsmen, from a selected idea of “3rd Karakuri Puzzle Idea Contest”.

He can not get the ball!